At last, an alternative to stainless steel firing pans!

Create a no-flake firing box for even the smallest kiln. No-flake firing foil is easy to fold into a low cost, sturdy metal clay box that is easily moved in and out of the kiln, with kiln tongs (of course). And the best thing, it doesn't flake so keeps your kiln clean.

Ordinary stainless steel makes a good container for carbon firing because it wont melt at the high temperatures needed to sinter metal clays, but the extreme heat oxidizes and expands the metal. As the metal cools, tiny flakes of oxidized steel begin popping off the surface in a process called 'spalling'. You can see it and hear it and it can go on for hours after a firing leaving black flecks for several inches around the pan.

No-flake firing foil is made from a special alloy that does not spall.

The package contains the foil and folding instructions. Have a peep at the video below to see how to fold the box. You get two sheets of foil measuring 30cm (12") square. This is enough to make one good sized box with a lid.

"The product should last between 30-50 firings, but none of this is guaranteed. It really depends on what you fire. If you primarily work with a base metal clay then that requires higher firing temperatures, in turn this is going to be consistently harder on the box. Some people also remove the box from the kiln right after firing instead of properly cooling the chamber. This can cause "crash cooling" on the box, which will reduce the lifespan on the product. Either way, you should expect around or over 30 firings."

(This info was collected from the great Metal Clay yahoo group, so therefore it is mostly peoples experiences and advice, not set in stone instructions). 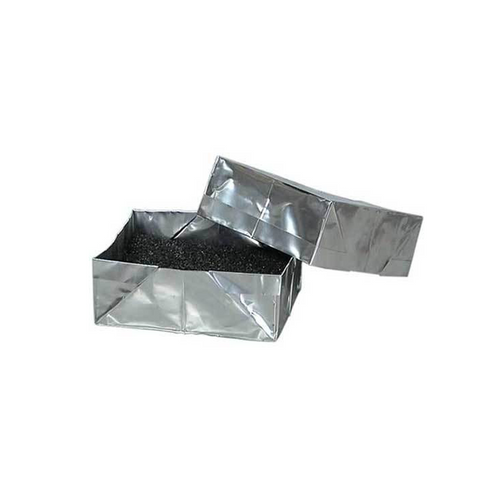